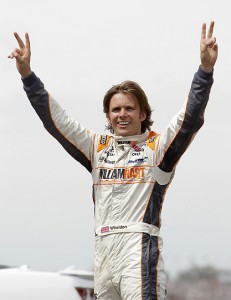 LAS VEGAS (AP) – Indianapolis 500 winner Dan Wheldon died Sunday at Las Vegas Motor Speedway after his car became ensnarled in a fiery 15-car pileup, flew over another vehicle and landed in a catch fence just outside turn 2. The 33-year-old racer was a two-time Indy 500 winner, including this year’s race.

Three other drivers, including championship contender Will Power, were hurt in the pileup during Lap 13.

Weldon was airlifted from the track to University Medical Center; about two hours later, his colleagues were told of his death.

[BLOGGER COMMENT: May he rest in peace. He and his young family made their home in St. Petersburg.]

This entry was posted in IndyCar and tagged Dan Wheldon, IndyCar. Bookmark the permalink.