He Who Dies With the Most Toys Wins

Posted on February 20, 2012 by administrator

The saying, “He who dies with the most toys wins,” has been attributed to flamboyant billionaire Malcolm Forbes. In my formative years during the “Greed is Good” 1980s this saying was emblazoned on t-shirts, hats and coffee mugs. A poster sporting that saying showing off a garage full of Porsches, Ferraris and Lamborghinis graced my bedroom wall during my middle school years. 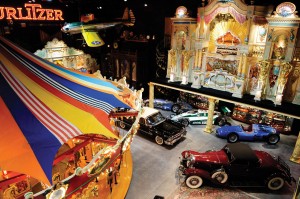 I’ve never seen anyone live this phrase more fully than a couple of toy collecting brothers from South Florida. The Milhous Brothers have been collecting “best in breed” musical instruments, juke boxes, timepieces, firearms and automobiles since the 1950s. As their collection grew they needed a place to store it so they built a 39,500 sf museum in Boca Raton, FL to store all their toys.

The relentless marching of the clock has pushed the brothers who are knocking the on the door of their 80s to succumb to the wishes of their tax planners and sell it all to clean up their estates. Watch this stunning video to learn more about this fabulous collection.