If St. Petersburg (and Beer Breakfast of course!) had an official alcoholic beverage, it would probably be beer. According to the Brewers Association, the overall U.S. beer market was worth $96 billion in 2011, 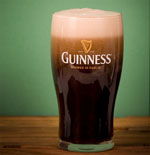 when some 200 million barrels of beer were sold (1 barrel equals 31 gallons of beer). In the same year, 1,989 breweries in the United States were fermenting everything from light lagers to chocolaty stouts. MMMmmm, Guinness anyone?

So what’s in a glass? Water, mostly. But also flowers, fungus and grains. Beer gets much of its flavor from hops, which are vine-grown flowers that look more like mini-pinecones than daisies. The alcohol in beer comes from grain, usually barley, which is malted (or allowed to germinate) and then steeped in water to extract its sugars. Those sugars become a feast for yeast, the tiny, unicellular fungi that thrive on sugars and excrete alcohol.

Yeasts usually get filtered out of commercial beers before they’re bottled, but they leave traces (and flavors) behind. A study published in August 2010 in the Journal of Proteome Research found that beers contain a surprising variety of proteins: at least 62, 40 of which come from yeast. These proteins are key in supporting beer’s foamy head, the researchers noted.

And that brings us back full circle to…. Beer Breakfast! Please join us at the next Beer Breakfast Event in support of Tampa Bay Watch being held at the Mandarin Hide on Saturday, March 29, 2014 at 9am. Come one, come all and help us raise awareness and funding to keep the estuaries of Tampa Bay clean and healthy!! A Beer Breakfast is…. Revelry~Fellowship~Sanctuary.