ST. PETERSBURG, Fla. — The corner of Bayshore Drive and Albert Whitted Park — aka Turn 10 of the Honda Grand Prix of St. Petersburg — is an appropriate spot to pay tribute 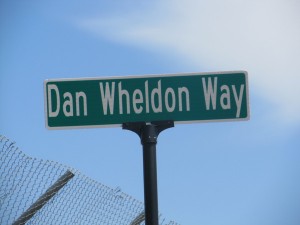 It was Turn 10 where Wheldon overtook Ryan Briscoe and went on to win the inaugural IZOD IndyCar Series street race on April 3, 2005, leading a sweep of the top four positions for then-Andretti Green Racing.

A few hours later, Wheldon jumped into Tampa Bay to celebrate. Seven weeks later, he won the first of his two Indianapolis 500 titles and doused himself in milk and champagne.

Wheldon, the 2005 series champion who moved to St. Petersburg in 2005, died from injuries suffered in a race crash in October. His wife Susie and two young sons still call the community home……. FULL STORY

This entry was posted in Uncategorized. Bookmark the permalink.